Are There Contradictions In The Bible

Continue To The Contradictions Pages 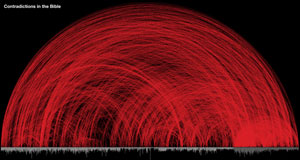 You may have seen this image that shows a visual representation of âall of the contradictions in the Bible.â In total there are 439 supposed contradictions. Each one is represented by an arching red line. You can click on the image to see the full picture including the exact “contradictions” it shows.

I have taken the challenge to examine the validity of each objection raised and to show that the Bible is clear of these charges.

One of the funny things I noticed about this is that some (many) are actually duplicate questions and questions of such a similar nature that it is almost pointless to answer them one by one as I could group many together into one single answer.

But the fact that question #7 and question #9 are EXACTLY the same, word for word, I believe it gives a clear testimony to the deception the image attempts to give.

Perhaps one day I will spend some time answering ALL of the “contradictions” found at The Skeptics Annotated Bible website as they graciously offer links to Christian responses to their pages. Please note that the image we have shown was not made by The Skeptics Annotated Bible and in no way should it be seen as such. But let’s be honest, I can only take so much before I slap my head and scream “Why is this even a question?!” That’s why I limit myself to 15 of these per page.

Let me give you an example through an illustration of how these people end up claiming there is a contradiction:

Robert claims he has no brothers, but there are three doctors who all say Robert is their brother. Which one of them is a liar?

Your first thought may be that it must be Robert. After all, if only one of them is a liar then if itâs one of the doctors that would leave two other brothers still there. But what if I told you the answer is that none of them are liars? Wouldnât that contradict this?

Well, it wouldâ¦if the doctors were not sisters!

Do you see what happened? A person could have assumed there was a contradiction because they either already had it in their mind that one thing was true (that the doctors were men) when I never said that at all. This is how it works with the Bible as well. Often we already have assumptions that are untrue and therefore we make the mistake of believing there is a contradiction because of it.

The Rule Of Contradictions

If I were to tell you that Robert had no sisters then the above example would be a contradiction and Robert would be a liar. But since there WAS a way to see how the statement could be true then this could not be considered as a real contradiction.

Keep this in mind when looking through the Bible. If one statement seems to require that another must not be true then you MUST see if there is a way that BOTH can be true before you can confidently say they are a contradiction.

Continue To The Bible Contradictions Pages