What does it mean to believe something? What if what we believe is wrong? What if we donât even know what to believe? What is faith?

The word “believe” means to hold something as being true. Of course, this does not mean that whatever we believe IS necessarily true. It just means we think it is true.

So what does the Bible mean when it says we need to believe? 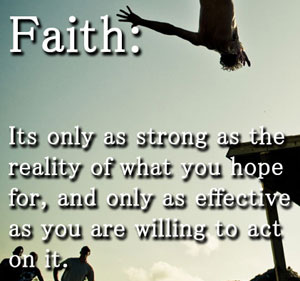 If you remember, in the last unit we talked a little bit about faith. What does the Bible say about faith? It is not only believing in something. It is also acting upon that belief. What do you think would happen if you believed you could fly, and then acted upon that by jumping off of your roof?

After examining the Bible in unit 1 we came to the decision that the God of the Bible is the one, true God. This is what we believe is the truth, based on the evidence that is so overwhelming.

Now, the Bible says that we must believe to be saved. Believe what? As I have already said there are many people who believe in all kinds of things. But that doesnât mean they believe in the RIGHT thing, the TRUE thing.

But without faith it is impossible to please him: for he that cometh to God must believe that he is, and that he is a rewarder of them that diligently seek him.

Here we find the next thing we need to believe. Jesus is the Son of God.

Jesus answered and said unto them, This is the work of God, that ye believe on him whom he hath sent. 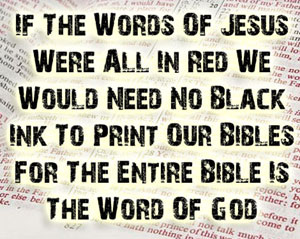 That means we must consider His words to be truth. It would be silly to know that Jesus is God and yet not believe His words! Here is another little bit of information for you. The words commonly colored red in Bibles are not the only words of Jesus. God is the author of the entire Bible. Jesus is God. That means Jesus was the one who told holy men of God what to write.

Again, in order to understand this, you will need to understand the concept of the trinity. God the Father, the Son, and the Holy Ghost are all one and the same person. Each one is a different part of the same God.

So we must not only believe in Jesus, we also need to trust in Jesus.

And saying, The time is fulfilled, and the kingdom of God is at hand: repent ye, and believe the gospel.

The word gospel means âgood news.â The good news is the next thing we need to consider as being true.

The good news is that Jesus died on the cross and was raised from the dead to bring us salvation. This is wonderful! But it doesnât mean anything if there wasnât first some bad news. 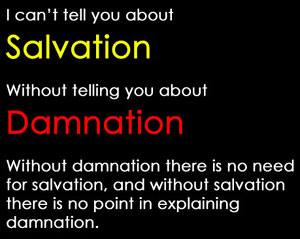 I have heard some people claim that you can preach the gospel without telling people about hell. This is completely wrong. Without the bad news of sin, death, and judgment the good news has no meaning.

So let me tell you very quickly what the gospel is. In the beginning, God created everything including man. Everything was perfect. There was no death. But man disobeyed God and the result was sin, death, and judgment. Because of that one sin we all have fallen into sin in our own lives.

That judgment is that every person who sins will be cast into hell. Later they will also be cast, with hell, into the lake of fire. The torment of these who sinned will last forever.

The good news though is that Jesus lived a sinless life as a man on Earth. Because of that, He had no need to die. But He chose to die in our place. All of the wrath and judgment that was to be placed on us because of our sins was placed on Him. So we could escape this judgment.

Then on the third day, Jesus was raised from the grave. Though He tasted of death for all of us He had no sin in Himself. So death could have no power over Him. Thus He lives forever having ascended to the Father in heaven making intercession for us always.

But these are written, that ye might believe that Jesus is the Christ, the Son of God; and that believing ye might have life through his name.

And so there you have it. These things were written so that you may believe and have life because of that belief.

No other religion, god, philosophy or anything else can bring us life. The gospel is that through Jesus alone we can escape the wrath of God and be saved. Even greater than that though is the fact that not only can we escape hell, but we can also know God intimately again.

But if the gospel did not begin with the bad news then what was the reason for the death of Jesus and why is it such good news? It wouldnât make sense to claim salvation if there was nothing to be saved from.

So to sum up what it is that the Bible says we need to believe here is the final list:

Go through that list. Do you believe each and every one of those things? Or in other words, do you consider those things to be true?

If so then you meet the very first requirement of salvation. We must first believe./p>

To him give all the prophets witness, that through his name whosoever believeth in him shall receive remission of sins. 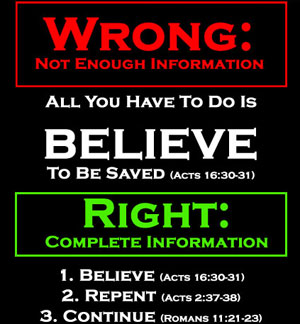 Now, with all of that said it is easy for us to simply say that this is the end of the story. âIf we believe these things to be true then we are saved.â But this is only the first of 5 actual requirements for salvation.

If we simply believe and do not act on that belief then we still fall short.

Thou believest that there is one God; thou doest well: the devils also believe, and tremble.

Go through that list again. Isnât it striking that even the devils believe these things are true?! Yet even though they believe, they are still enemies of God.

Remember that we spoke of faith earlier? Faith is a belief that results in action.

21 Was not Abraham our father justified by works, when he had offered Isaac his son upon the altar? 22 Seest thou how faith wrought with his works, and by works was faith made perfect? 23 And the scripture was fulfilled which saith, Abraham believed God, and it was imputed unto him for righteousness: and he was called the Friend of God. 24 Ye see then how that by works a man is justified, and not by faith only.

Earlier James says faith without works is dead. Itâs like having lungs but not breathing. If you believe these things to be truth then you have lungs. What are you going to do with them?

Faith or Works Based Salvation

Many get confused about this. Without works, our faith is dead and useless. It is as good as the belief that devils have.

Does this mean we are saved by our works then? No! The Bible says we are âsaved by grace through faith and that not of ourselves.â There are also many other verses that speak of this very same thing.

So how can James say dead faith is not enough?

Look at the illustration of the lungs one more time. When we breathe we are alive. Can we breathe without our lungs? No, of course not. Can we live with just our lungs and never take a breath? Again the answer is no. But if we have lungs that are in action then we are alive.

This is how James can say that we must have both. Let me now ask you another question. What makes it possible for us to take a breath? Our lungs.

So we could say that we are able to live because of our lungs and not because of the air around us. Does that not sound very familiar to the scriptures that say we are saved by grace through faith and not our works? Think of air as our works and our belief as our lungs.

Again, without our lungs, the air would be useless and without the air, our lungs would also be useless. But first we have our lungs and second, we breathe in the air. Thus we are saved by faith (our lungs) and not simply because there is air around us. 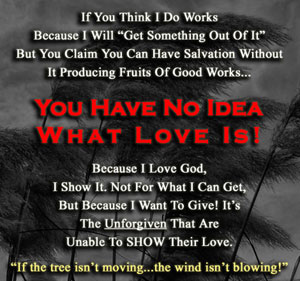 As another example, I could say that I take the trash out because I love my wife and know it would please her. Is my love works based? No, my works are LOVE BASED. This is the difference. Works naturally flow from faith, and faith works by love. We believe, we love, we work.

So now that we have covered the things we need to believe we have our proverbial lungs. We are not yet living. But we are getting there. We have what we need to live. What are we going to do with our belief? Itâs time to start putting those lungs to use.

In the next units, we are going to talk about the âworks.â Just remember that these works are the RESULT of our belief. They do not come before it. Thus our salvation is first and foremost by faith alone. It just so happens that faith needs to act like faith if you plan to live by it.

Continue To Unit 3:4 – What Does Repent Mean OR


One response to “What Is Faith”