Knowing the Voice of God: The Bible

God speaks. Did you know that? No, He hasnât stopped at any time and the Bible NEVER says that He has. In fact, the Bible tells us that those who are His should know His voice.

My sheep hear my voice, and I know them, and they follow me:

7 Wherefore (as the Holy Ghost saith, To day if ye will hear his voice, 8 Harden not your hearts, as in the provocation, in the day of temptation in the wilderness:

20 Behold, I stand at the door, and knock: if any man hear my voice, and open the door, I will come in to him, and will sup with him, and he with me.

So have you heard the voice of God? It doesnât always come in the form of a thundering voice from the sky. There are many ways He speaks. Letâs learn about them now.

Learning How to Hear from God

Believe it or not, you HAVE heard the voice of God. In fact, there isnât a single person on earth that has not. But, not everyone recognizes that voice. So it may go âunheardâ simply because we ignore it, but that doesnât mean He hasnât spoken to us.

11 Behold, the days come, saith the Lord God, that I will send a famine in the land, not a famine of bread, nor a thirst for water, but of hearing the words of the Lord: 12 And they shall wander from sea to sea, and from the north even to the east, they shall run to and fro to seek the word of the Lord, and shall not find it.

I often hear people say that these verses speak of a time when the word of God would not be preached. But that isnât what this says at all! The verses actually say the famine isnât a lack of preaching. It is a lack of HEARING.

We are told that people would seek the word of God, but they will not be able to find it. This isnât because it is not here, though. It is because they can not hear what they refuse to listen to. So they search for another word.

14 And in them is fulfilled the prophecy of Esaias, which saith, By hearing ye shall hear, and shall not understand; and seeing ye shall see, and shall not perceive: 15 For this people’s heart is waxed gross, and their ears are dull of hearing, and their eyes they have closed; lest at any time they should see with their eyes and hear with their ears, and should understand with their heart, and should be converted, and I should heal them.

But why? Why arenât we listening? If the Bible says we are going to be searching to find the word of God then our ears and eyes MUST be opened. But that is why these verses did not say that they have not heard. It says they did not understand. In other words, they rejected the word of God.

3 For the time will come when they will not endure sound doctrine; but after their own lusts shall they heap to themselves teachers, having itching ears; 4 And they shall turn away their ears from the truth, and shall be turned unto fables.

This is the prophecy of Isaiah being retold. Notice that the people WANT to hear. But they only want to hear things that please them. Because of this, they reject the truth. They hear it and rather than taking it to heart they ignore it or find a âreasonâ to dismiss it. They turn their ears, instead, to listen only to what they want to hear, true or not.

Often what we want to hear are the things that we already believe and agree with. But the truth is that even though it is pleasing to us to hear these things it doesnât mean we HAVE to shut our ears to anything else. Or we may miss out on sound doctrine. If we are to be able to hear from God then we are going to have to be actively listening.

An Example of Dull Hearing

Have you ever talked to someone who is hard of hearing? Sometimes they will think you said something other than what you did. You can ask how they liked their dinner and they will reply âNo, I donât want to bike later.â

Now, I know it can be frustrating to talk with them at times like this. As a preacher, I know how it feels to speak to people who canât âhearâ all that well myself. But put yourself in their shoes for a moment. They really did not understand you, but they think they did. So now they are just as frustrated at you, for being frustrated at them.

So what happens? Both sides become upset and there is no way to communicate. It would be so much easier if they could just hear and understand, wouldnât it? But stop, put yourself in that person’s shoes, who canât hear well, for a moment.

What are you going to do? Someone is trying to talk to you and you canât hear them. You would probably lean in a little closer. Maybe you would put your hand up to your ear to help the sound. If you still couldnât hear then you would ask them to write what they are saying down. 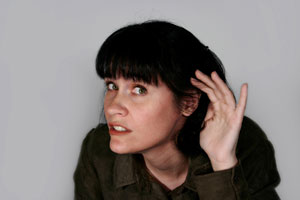 Those are things you would do IF you wanted to hear them. If not, then you would ignore them, or pretend there is no use in trying to listen. You may even turn around and walk away. After all, they didnât have anything to say that you wanted to hear.

So let me ask you this, … what would you do IF you WANTED to hear from God? Would you read the Bible? Would you spend time trying to understand it, and apply it to your life? Would you seek the word of God even if it hurts, and isnât what you already believe? Just how far are you willing to go to become able to hear Him?

Knowing the Voice of God in the Bible

2 (Which he had promised afore by his prophets in the holy scriptures,) 3 Concerning his Son Jesus Christ our Lord, which was made of the seed of David according to the flesh;

For the prophecy came not in old time by the will of man: but holy men of God spake as they were moved by the Holy Ghost.

And the Lord said unto Moses, Write this for a memorial in a book, and rehearse it in the ears of Joshua: for I will utterly put out the remembrance of Amalek from under heaven.

The written word is one way that God tries to speak to us. This is perhaps the most common way that people are able to hear His voice. What He spoke to the prophets to write down are His words to us.

A voice doesnât have to be a sound. The sound of a voice itself is only a method for communication. What is being communicated is what God is saying, though. So even if it is words written down in the Bible it is God speaking and, therefore, it is His voice. 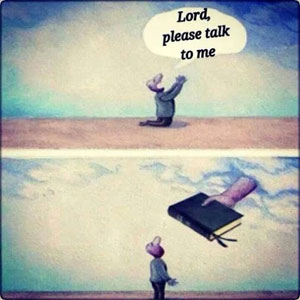 So if you would like to hear from God then open the Bible. His words are always there ready to âjump off the pageâ for you. But remember that even with this you must be willing to lean in and spend time trying to understand. This is because we all have a hard time understanding God at times. We are only human. But He CAN teach us.

So many people want to hear God speak, but they donât understand that the Bible itself contains the words He says. Those words are not âfor another timeâ since God is eternal and never changes. Whatever was said before and to whomever, it was said, we can still apply it to our own lives if we are able to understand how.

Simply put, you can hear God speak just by opening the Bible, and reading it. If this was the only way you ever heard from God then it would still mean you have heard Him. In fact, since God does not contradict Himself, we can know if any of the other âvoicesâ we may âhearâ are or are not from Him. All by comparing it to the Bible.

Now, obviously, this is only one way that God speaks. I have found that it is the most common way, though. He also speaks through prophets, a thundering audible voice, dreams, visions, and so on. We will talk about some of these other ways in the next few units.

You Can Not Make God Speak

13 If Balak would give me his house full of silver and gold, I cannot go beyond the commandment of the Lord, to do either good or bad of mine own mind; but what the Lord saith, that will I speak?

And when Saul enquired of the Lord, the Lord answered him not, neither by dreams, nor by Urim, nor by prophets.

Later, when we talk about prophets, we will need to understand that we do not control God. If He does not wish to speak to us then He will not. This is why we can not (as many do) make claims that we will be speaking âprophetic wordsâ at such and such a time. If God has not specifically told us that He would speak to us at that time then we can’t promise that.

We established the authority of the Bible in unit 1 if you would like to know more about it. But at this point in the course (if you have been following along) you should be equipped with an understanding of it, and why it is important.

Continue To Unit 4:2b – Knowing the Voice of God: What Is a Prophet OR


One response to “Knowing the Voice of God: The Bible” 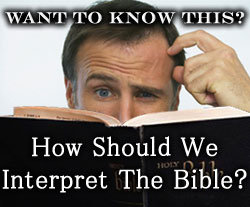