What Does The Bible Say About A One World Government

But if you ask them about what verses show this there are few that can provide you with them. Others may be able to show some verses but the verses don’t really add up. So today we are going to ask the question. Does the Bible actually predict a one world government? Lets get into the scriptures to find out!

The book of Daniel tells us so much about the governments of the world past present and future. So of course this is the first place we are going to look.

28 But there is a God in heaven that revealeth secrets, and maketh known to the king Nebuchadnezzar what shall be in the latter days. Thy dream, and the visions of thy head upon thy bed, are these; 29 As for thee, O king, thy thoughts came into thy mind upon thy bed, what should come to pass hereafter: and he that revealeth secrets maketh known to thee what shall come to pass.

We read here that king Nebuchadnezzar had a dream given to him from God to show him things to come. Since he couldn’t remember the dream God gave Daniel the information and the interpretation of it. 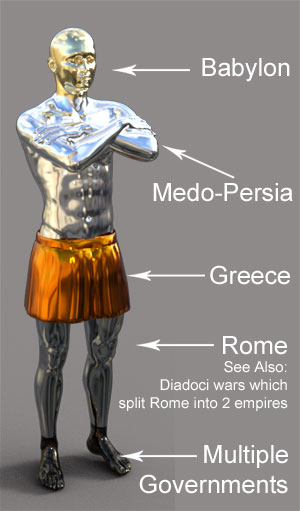 31 Thou, O king, sawest, and behold a great image. This great image, whose brightness was excellent, stood before thee; and the form thereof was terrible. 32 This image’s head was of fine gold, his breast and his arms of silver, his belly and his thighs of brass, 33 His legs of iron, his feet part of iron and part of clay. 34 Thou sawest till that a stone was cut out without hands, which smote the image upon his feet that were of iron and clay, and brake them to pieces. 35 Then was the iron, the clay, the brass, the silver, and the gold, broken to pieces together, and became like the chaff of the summer threshingfloors; and the wind carried them away, that no place was found for them: and the stone that smote the image became a great mountain, and filled the whole earth. 36 This is the dream; and we will tell the interpretation thereof before the king.

37 Thou, O king, art a king of kings: for the God of heaven hath given thee a kingdom, power, and strength, and glory. 38 And wheresoever the children of men dwell, the beasts of the field and the fowls of the heaven hath he given into thine hand, and hath made thee ruler over them all. Thou art this head of gold.

Daniel tells the king that this image made of so many different parts begins with the head of gold. Now he tells us that the kingdom of Babylon is what the head of gold represents. As we go on we will see that this entire image is a symbol for the kingdoms of the world and the order they come in.

39 And after thee shall arise another kingdom inferior to thee, and another third kingdom of brass, which shall bear rule over all the earth.

Daniel tells the king that another government will come to power in the place of Babylon. The fact that there are two arms of silver are important, though not mentioned here. This is because the kingdom that came next was actually 2 kingdoms. The kingdoms of Medo and Persia. From which we get the kingdom of Medo-Persia.

After Medo-Persia came the kingdom of Greece.

40 And the fourth kingdom shall be strong as iron: forasmuch as iron breaketh in pieces and subdueth all things: and as iron that breaketh all these, shall it break in pieces and bruise.

After Greece came the kingdom of Rome. Everyone knows how powerful Rome was. It was an empire that expanded by conquest. Anyone that would not submit to Rome were broken under their military power.

But here again there is a bit of information not mentioned. This iron turns into two legs. If you read the previous study you will be able to follow along here. The two legs are the north kingdom of Syria and the south kingdom of Egypt.

Again, here we see the kingdom of Rome divided into two. It’s at this time that the powerful world empires are reduced to a fraction of their former glory. Now they are partly strong, and partly weak.

43 And whereas thou sawest iron mixed with miry clay, they shall mingle themselves with the seed of men: but they shall not cleave one to another, even as iron is not mixed with clay. 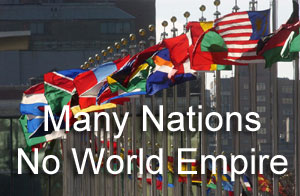 This is when the powerful world governments start to break apart. No longer is there one that rules supreme. The world begins to look more like what we see today. Rome has broken down and there are many different nations, some strong, some weak. All of them seeking peace with each other but they will not manage to form one government again.

They are said to mingle themselves with the seed of men. This tells us that nations will come and go. People will mix in with other nations. Today if you look into ancestry you will find that many people have many different national ancestries. Rome has fallen and spread through the world the gentiles. These gentile nations, the ones we see today, are simply the iron mixed with clay. They are Rome, but in a mixed and broken state.

44 And in the days of these kings shall the God of heaven set up a kingdom, which shall never be destroyed: and the kingdom shall not be left to other people, but it shall break in pieces and consume all these kingdoms, and it shall stand for ever.

We see here that it is in these days that Jesus will crush the worlds governments and will setup His kingdom that will never end.

But as far as a one world government, the Bible says the nations will not cleave one to another. So there will be no one world government. I want you to note however the ten toes on this image. In Daniel 7 he is given a vision of 4 beasts that also represent the same thing as this statue. But he gives more detail.

One of the important details is that he see’s ten horns on the last one. These are the same meaning as the ten toes.

In the last days there will be 10 main kingdoms that control all the world. Notice they are not all one kingdom. They are not a one world government. They are simply ten powerful nations. It is during the days of these ten kings that the antichrist will rise to power.

12 And the ten horns which thou sawest are ten kings, which have received no kingdom as yet; but receive power as kings one hour with the beast. 13 These have one mind, and shall give their power and strength unto the beast.

In the book of Revelation we see this repeated. Ten kings who rule their own kingdoms. BUT they support the antichrist. Many visions through the Bible involving beasts represent the same theme found here in Daniel. I’ll let you read more about them on your own.

I know this is a lot to take in. And I’ll talk in more detail on the antichrist in a future study. But for now we have at least discovered that the Bible does not tell us there will be a one world government. Instead there will be multiple individual nations of gentiles spread through the world. This is what we see today.

In our next study we will go into detail about the man of sin himself. Where does he come from? How does he gain power? What does he do?

Continue To Unit 6B:6 – Where Will The Antichrist Come From OR

I met my husband on a phone site July 3 2014. 3 months after we met we got married. He was in work release and had a few months till he got out. When he got out we lived with a lady that had bone cancer and we moved in to help her out. Well, END_OF_DOCUMENT_TOKEN_TO_BE_REPLACED