What The Bible Says About Death

I asked someone recently what they knew when it came to being saved. They let me know that they had never been saved and didn’t really know anything about it.

They knew what the Bible says about the fall of man and how Jesus died on the cross. They just didn’t know what it meant to them. That is where many people are. What does it mean to you?

Too many people just ignore the topic. They don’t think about it and feel uncomfortable when someone brings it to their attention. In the end they live all their lives ignoring God and in the end they die without having a hope for what comes next.

So I encourage you to study about salvation here. I am going to trust that you know what the Bible says about how humanity has fallen and needs salvation. I am also going to assume you know about Jesus and what He has done. But I hope the questions you read below will help you understand the need for salvation for yourself and others.

Death – The Punishment Of Sin

To be very blunt about what is at stake I wanted to tell you up front that there is death waiting for the soul that sins. That may not mean what you think though. Our idea of death isn’t complete. We have seen the death of the body. It is a process of decay. 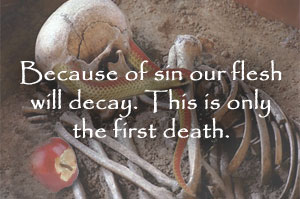 The body dies slowly. From the moment we begin in our bodies the process of death is working. In the end the body no longer fights and surrenders to decay. Death does not mean something no longer exists. Talk to any physicist and they will tell you nothing is ever completely gone. In some way it remains. It just changes form.

That is the death of the body. It is a breaking down of everything. The body degrades and turns into it’s most basic and naked form…dust. It is what happens because of the sinful nature living in our bodies. But the soul…that is what this verse is talking about.

We all must die. Our bodies will be turned into dust. That is because of sin. But what about the soul that this verse talks about? What is the soul?

The word translated as soul in the Bible is nephesh in Hebrew. It means “living being” and is what makes us alive. It is quite literally the breath of life from God.

7 And the Lord God formed man of the dust of the ground, and breathed into his nostrils the breath of life; and man became a living soul.

This is what is called the first death. The Bible actually says there are two deaths someone can die. All men are appointed to the first one because everyone (with the exception of Jesus) has sinned. Because Adam and Eve sinned that day, death entered into the world.

They did not just die on the inside as many believe though. God said they would die the very day that they ate. He meant what He said without hinting around. Their bodies literally died that day. Remember that death is decay. They decayed at that moment. This is why our cells reproduce. It is because we are in a constant state of decay and must also be in a constant state of renewal to combat it.

24 O wretched man that I am! who shall deliver me from the body of this death?

As Paul wrote so clearly…we are already in a dead and dying body.

It should be clear to us that we will have the breath of life (our soul) exit our bodies at some time. But what happens after you die? This is the question that will truly answer why we need to be saved.

Because God is a Holy and just God He will judge us for the things we have done in our bodies.

12 And I saw the dead, small and great, stand before God; and the books were opened: and another book was opened, which is the book of life: and the dead were judged out of those things which were written in the books, according to their works.13 And the sea gave up the dead which were in it; and death and hell delivered up the dead which were in them: and they were judged every man according to their works.14 And death and hell were cast into the lake of fire. This is the second death.

The day is coming when everything will be made right by the judge. Those who stole, murdered, lied, and did everything and anything else against the law of God will face the punishment for their sins. That thought should motivate the Christian to bring others to Christ and it should motivate those who don’t know Jesus to find Him.

The problem is that all people have sinned.

So we all have to face the punishment of sin. That is why we need salvation.

The punishment is death. But if you are thinking that after our bodies die we are no longer able to die again you are mistaken. Our bodies may have died but our spirit…the breath of life remains as it was. It is only without a body now.

24 And they shall go forth, and look upon the carcases of the men that have transgressed against me: for their worm shall not die, neither shall their fire be quenched; and they shall be an abhorring unto all flesh.

10 The same shall drink of the wine of the wrath of God, which is poured out without mixture into the cup of his indignation; and he shall be tormented with fire and brimstone in the presence of the holy angels, and in the presence of the Lamb:11 And the smoke of their torment ascendeth up for ever and ever: and they have no rest day nor night, who worship the beast and his image, and whosoever receiveth the mark of his name.

23 And in hell he lift up his eyes, being in torments, and seeth Abraham afar off, and Lazarus in his bosom.24 And he cried and said, Father Abraham, have mercy on me, and send Lazarus, that he may dip the tip of his finger in water, and cool my tongue; for I am tormented in this flame.

The second death is a casting away into darkness and torment that will never end. Notice in the verses above (Isaiah 66:24) how the worm doesn’t die in hell. The fire also never goes out. When fuel is burned up the fire goes out…but if the fuel never breaks down and turns to dust then the fire will continue.

Also notice how the smoke and torment continues forever and that there is no rest or end to the torment in Revelation 14:10-11. Finally take note of how the rich man in Luke 16:23-24 still had use of his unconsumed eyes and other senses.

The first death may have been painful but at least it broke our bodies down to a point that the pain would stop. The second death may be very much like the burning bush that Moses had seen. It was on fire, yet was not consumed. That is a study for another time though.

I hope you see why we need salvation.

There is only one way to escape the second death. The Judge who will sentence us to death in a lake of fire or to life in joy and peace wants to have mercy. The only way He can have both mercy and justice though is if someone pays for our sins. That is what Jesus did (read about it here). Please read How Can We Be Saved to see how to make sure Jesus will tell the judge that the debt He paid was for you as well. 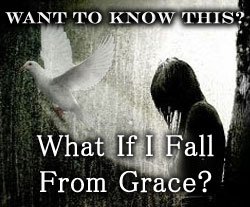