I have heard this question too many times, âI do not believe in God and will not follow Him. Does that mean God will send me to hell?â

The question itself is a little arrogant and contradictory. On the one hand, they boldly declare that they do not believe in God. Therefore, they refuse to believe they are going to hell. But, on the other hand, they ask if God will send them to hell. So they oppose themselves with the very question.

Now, I have heard a lot of people dance around this question. They normally are trying not to offend someone, while not compromising either. But, let me give you the one-word answer. YES!

Sometimes the truth is offensive! The Bible is very clear that there is only one way to be saved from this place called hell:

12 Neither is there salvation in any other: for there is none other name under heaven given among men, whereby we must be saved.

Good works and living a good life will not do, according to Isaiah 64:6. No other religion will prevent us from going to hell, according to Acts 4:12. Nothing else will do. So the fact is that if you reject Jesus you also reject salvation. That means you have a one-way ticket to hell.

Why? We have already mentioned in earlier lessons that EVERYONE is a sinner. That means everyone has to pay the penalty for their sins. That penalty is death. The death of the body and the death of the soul. The first and second death. 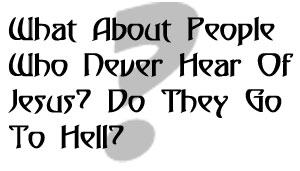 Now, what about everyone in the Old Testament, and all those who have never heard of Jesus?

When you read that the Bible says there is no salvation in any other than Jesus, you may wonder if it is fair. Rejecting Jesus will result in everlasting torment. So it is easy to begin looking for reasons to accuse God of being unfair. That is exactly what this question is all about.

But here is the issue with it: Jesus is the same God we see in the Old Testament and you donât have to know the Bible to know God. This is something we see in the case of Abraham who was called the “friend of God” long before the Bible was written. All humans have been given the chance to seek AND FIND God or deny Him.

But how would we know there was even a God in the first place if we were not told? Iâll let the next verse answer that question.

5 For this they willingly are ignorant of, that by the word of God the heavens were of old, and the earth standing out of the water and in the water: 6 Whereby the world that then was, being overflowed with water, perished: 7 But the heavens and the earth, which are now, by the same word are kept in store, reserved unto fire against the day of judgment and perdition of ungodly men.

You would have to be willingly ignorant to not know there is a God. Even the atheist will admit that the reason there are so many religions is because people need to believe in a God to make the universe make sense. This is even if God is imagined.

We exist, the world exists, and without a God none of it makes sense. This is why many atheists are always trying to learn more about the big bang. Itâs because they havenât been able to make sense of anything without there being a God. So they just claim ignorance.

âWe donât know what was in the beginning or how this all started.â But that is just because they would rather be willingly ignorant of the only thing that makes sense. So rather than accept it they just shrug it off saying they don’t know.

So the first thing people would do before Jesus is to look around them. They would have to come to the conclusion that there must be a God. Or nothing makes sense.

Now, … when people understand that this invisible God created them they ask another question. What makes God happy or unhappy? Or, to put it another way: “Who is God?”

Have you thought of how many religions there are in the world today, and in the past? It seems like everyone knows there is a God, but everyone has a different god. Paul came to a people like this in the book of Acts.

22 Then Paul stood in the midst of Mars’ hill, and said, Ye men of Athens, I perceive that in all things ye are too superstitious. 23 For as I passed by, and beheld your devotions, I found an altar with this inscription, To The Unknown God. Whom therefore ye ignorantly worship, him declare I unto you. 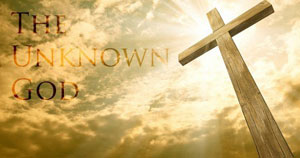 Paul recognized that these people were blindly grasping at straws. They were trying to know this “Unknown God.” They worshiped Him in ignorance. They knew He was there but they didnât know Him.

Think of Abraham. He didnât come from a people that knew all about God. He simply heard God speak. He knew God was there, but it was going to take some time to get to know this God and eventually become âthe friend of God.â

This is what people did before Jesus and before the word of God was preached to them. They worshiped God in ignorance.

13 (For not the hearers of the law are just before God, but the doers of the law shall be justified. 14 For when the Gentiles, which have not the law, do by nature the things contained in the law, these, having not the law, are a law unto themselves: 15 Which shew the work of the law written in their hearts, their conscience also bearing witness, and their thoughts the mean while accusing or else excusing one another;)

To put this another way, you donât have to be told the difference between right and wrong. We all have a conscience. Itâs that thing that makes us feel good when we help someone or bad and guilty when we donât. Of course, even though we are all born with this we can choose to ignore it. When we do we eventually end up no longer knowing the difference between good and evil. But that is another topic.

30 And the times of this ignorance God winked at; but now commandeth all men every where to repent:

You see, God has never been angry with people just because they didnât know His name. But the Bible does say that the work of the law was written on their hearts and their conscience and their thoughts accused or excused one another. In other words, if an evil man repented from that which he knew to be evil then his sins were forgiven.

But now God no longer winks at ignorance because His name and word have been declared to the whole world. He confirmed that He alone is God by raising Jesus from the dead. And the fame of Jesus has gone out into all the world.

So there is no more need for God to “wink” at our ignorance since we are no longer ignorant. We have heard of Jesus. We must submit to Him.

Remember how I said if an evil man repented then his sins were forgiven? Well what if an evil man knew of Jesus and he repented of all of his evil, … except he refused to follow Jesus? The answer is that he would still have one sin not yet repented of. Rebellion against God.

18 For the wrath of God is revealed from heaven against all ungodliness and unrighteousness of men, who hold the truth in unrighteousness; 19 Because that which may be known of God is manifest in them; for God hath shewed it unto them. 20 For the invisible things of him from the creation of the world are clearly seen, being understood by the things that are made, even his eternal power and Godhead; so that they are without excuse: 21 Because that, when they knew God, they glorified him not as God, neither were thankful; but became vain in their imaginations, and their foolish heart was darkened.

When you know of God, and yet you do not accept Him as God, then you have not repented of all sin. This is why when someone does not accept Jesus after hearing of Him they are condemned. It is because they have the sin of rebellion.

Would it not have been better to remain ignorant then? No. It would not have been better. Because you now have a chance to know the one true God, giver of life and hope, on a deep and personal level. And for those who would refuse Him, their hearts were already evil even if they didnât hear. Because God is light and their hearts are dark. So hearing of Him gives these people a chance to be saved.

They call good evil and evil good. They do not know the difference. They do not even know their heart is evil. But, when a man refuses to come to God, who is light, it shows that his heart is dark.

Now you know the answer to the question of how were people saved before Jesus. You know why you must accept Jesus when you do hear of Him. It’s not the name “Jesus” that people have to know. It’s the God behind the name.

Unit 2 Complete. Return To Course Home To Begin Unit 3 – Repentance and Salvation OR


One response to “What If Someone Never Hears about Jesus”