One reason people believe this is because normally when people were filled with the Holy Ghost, in the New Testament, they DID speak with tongues. So there seems like a solid precedence to make the case that this is simply what happens when someone receives the Holy Ghost.

There are many people who even believe that there is no one that received the Holy Ghost without speaking in tongues. But this claim is untrue, as we will show in a moment. The point, though, is that the reason people believe this is not based on scripture. Nothing in the Bible says or indicates that tongues are the evidence of the Holy Ghost.

The assumption is that because some people did speak in tongues it must that way for everyone. So, because of this assumption, many people believe in “the baptism of the Holy Ghost with the evidence of speaking in tongues.”

Before we go into further detail on those assumptions and explain why this is untrue, I would like to mention a few other scriptures that are used to justify this doctrine.

17 And these signs shall follow them that believe; In my name shall they cast out devils; they shall speak with new tongues; 18 They shall take up serpents; and if they drink any deadly thing, it shall not hurt them; they shall lay hands on the sick, and they shall recover. 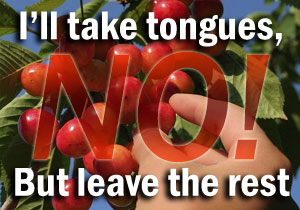 I want you to take note of something. Many people claim this passage proves that the sign of tongues MUST follow EVERYONE who believes. But look at the passage again. It also includes casting out devils, taking up serpents, not being hurt by deadly drink and the healing of the sick.

The question I would like to ask is why do some people focus on tongues as the single evidence of the Holy Ghost when the rest of these things are not mentioned as such?

It should not be too hard to understand that when Jesus said âthem that believeâ He was speaking of a group. Thus, the GROUP would do all of these things, but not necessarily each individual. So this passage can not be used for the claim that speaking in tongues is evidence of receiving the Holy Spirit.

2 For he that speaketh in an unknown tongue speaketh not unto men, but unto God: for no man understandeth him; howbeit in the spirit he speaketh mysteries.

These passages, taken together, are also used to claim that speaking in tongues is what the Bible means when it says that we must worship God in spirit. The claim is that tongues are a supernatural prayer language. So when you pray in tongues you are praying in the spirit.

What It Means to Worship and Pray in the Spirit

To show that this is an error in understanding these passages I will provide more scriptures. These show people IN THE SPIRIT while they spoke WITHOUT tongues:

43 He saith unto them, How then doth David in spirit call him Lord, saying,

18 The Spirit of the Lord is upon me, because he hath anointed me to preach the gospel to the poor; he hath sent me to heal the brokenhearted, to preach deliverance to the captives, and recovering of sight to the blind, to set at liberty them that are bruised, 19 To preach the acceptable year of the Lord.

In that hour Jesus rejoiced in spirit, and said, I thank thee, O Father, Lord of heaven and earth, that thou hast hid these things from the wise and prudent, and hast revealed them unto babes: even so, Father; for so it seemed good in thy sight.

9 Then there arose certain of the synagogue, which is called the synagogue of the Libertines, and Cyrenians, and Alexandrians, and of them of Cilicia and of Asia, disputing with Stephen. 10 And they were not able to resist the wisdom and the spirit by which he spake.

4 And finding disciples, we tarried there seven days: who said to Paul through the Spirit, that he should not go up to Jerusalem. 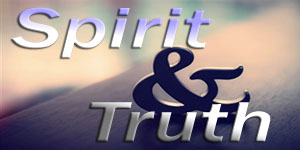 Of course, there are many more verses I could mention. But in the end, I think it is best to just explain the truth of this subject. So with that said, let me explain what it actually means to worship and pray in the spirit.

18 And be not drunk with wine, wherein is excess; but be filled with the Spirit; 19 Speaking to yourselves in psalms and hymns and spiritual songs, singing and making melody in your heart to the Lord; 20 Giving thanks always for all things unto God and the Father in the name of our Lord Jesus Christ;

Take note that when it speaks of being filled with the Spirit here it doesnât mention speaking in tongues at all. What it does speak of is having a heart for God.

And because ye are sons, God hath sent forth the Spirit of his Son into your hearts, crying, Abba, Father.

17 But he that is joined unto the Lord is one spirit.

So what can we gather from all of this? We should be able to see that worshiping God in Spirit and in truth doesnât mean speaking in tongues. It means being His, following Him, and having His life inside of you. Whatever we pray, as we are walking in the Spirit, IS IN THE SPIRIT (tongues or no tongues).

Now that we have dealt with those issues we can come back to the real reason people believe in this doctrine. The real reason, once again, is a false assumption based on a pattern seen in the book of Acts. It because people would often speak in tongues. 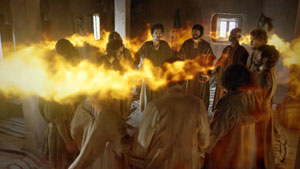 There are three events where this happens when people had just received the Holy Ghost. These are the ones often mentioned. The first, is on the day of Pentecost, as you can read about in the first few chapters of Acts. It is here that we find people being filled with the Holy Ghost, and speaking in tongues.

By the way, in Acts 19 you may want to take special note that these were disciples of JOHN THE BAPTIST and not Jesus. So they were not already Christians. This is why Paul had to preach Jesus to them and when they heard of Jesus they believed and received Him.

38 Then Peter said unto them, Repent, and be baptized every one of you in the name of Jesus Christ for the remission of sins, and ye shall receive the gift of the Holy Ghost. 39 For the promise is unto you, and to your children, and to all that are afar off, even as many as the Lord our God shall call. 40 And with many other words did he testify and exhort, saying, Save yourselves from this untoward generation. 41 Then they that gladly received his word were baptized: and the same day there were added unto them about three thousand souls.

You may note that it never says these 3,000 people also spoke in tongues.

31 And when they had prayed, the place was shaken where they were assembled together; and they were all filled with the Holy Ghost, and they spake the word of God with boldness.

Note that as they were filled with the Holy Ghost it does not say they spoke with tongues. It says they spoke the word of God with boldness.

17 Then laid they their hands on them, and they received the Holy Ghost.

Again, there is no mention of them speaking in tongues. Even Paul himself is mentioned as receiving the Holy Ghost in Acts, but it does not say he spoke in tongues at that time.

Now, you may already know that I believe omission doesnât prove anything. But, neither does assumption. To build a doctrine that a person MUST speak with tongues around an assumption is a bad idea. Just because the events mentioned were common it doesn’t mean it was the rule.

Not All Speak with Tongues

The fact is that the Bible actually tells us that not all who are filled with the Holy Ghost speak in tongues.

Not all have the same gift of tongues, as stated in verse 10. It also says that there are those who do not operate in the gift of tongues and yet they do miracles, prophecy, and so on. So there is no way to say that this gift is the initial evidence of the Holy Ghost.

28 And God hath set some in the church, first apostles, secondarily prophets, thirdly teachers, after that miracles, then gifts of healings, helps, governments, diversities of tongues. 29 Are all apostles? are all prophets? are all teachers? are all workers of miracles? 30 Have all the gifts of healing? do all speak with tongues? do all interpret? 31 But covet earnestly the best gifts: and yet shew I unto you a more excellent way.

Again, not all have these gifts or positions. I would also like to point out that tongues are listed as the last of all of these things. Yet for something which God considers to be least of the gifts and offices we seem to put a lot of emphasis on it.

So to sum this up, we can see through scripture the assumption that all who received the Holy Spirit spoke in tongues is untrue. Thus, tongues are NOT the evidence of the Holy Spirit. As we said in the last unit, the FRUITS are the evidence.

Now, there is still more to cover on the subject of tongues. For example, why did those who spoke in tongues do so? What is the purpose of tongues? Is it still for us today? We will be talking about those things in our next unit!

Continue To Unit 4:4b – Is Speaking in Tongues Biblical OR 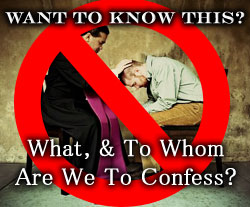