With so much teaching on the course of events that the Bible calls the last days you would think the matter would be well understood. But with so many people that seem confused and bewildered about end time prophecy it is clear that the author of confusion (Satan) has his hands all over the subject. Even teachers that spend all of their time on Bible prophecy do not seem to have a clear view the sequence of events.

If you feel like you have a fuzzy view of what is going to take place don’t worry. You are not alone. But I have a real treat for you today. I would like to share with you what I have found in the Bible. So here is the book of Revelations explained (by the way, it is Revelation…not Revelations).

The Book of Revelation Summary: The First 3 Chapters – The 7 Churches 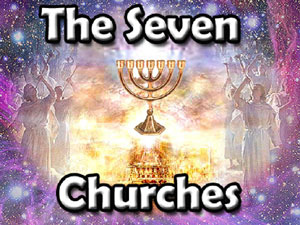 When you first open the book of Revelation you will see some strange imagery followed by very specific messages to the church. There are many truths you can find here. Since I just want to give an overview I would like to recommend you study for yourself the details to find out what some of the symbolism means.

One very important detail I do not want you to miss is that Jesus tells all but two of the churches that they are in danger of His wrath. There are many people calling themselves Christians today that fit into those churches.

But there are the two churches that He did not give a warning to of His wrath. Instead He encouraged them. One He told would be kept from the hour of temptation (we will get into what that is further down the page). The other would be killed but would be with Jesus.

The Book of Revelation Summary: The 4th Chapter – John’s Call

Many believe that when God calls John up to see the things He has to show Him in heaven that it is an end time prophecy of God taking the church up from the earth before the tribulation. The only way you can get this view of what happens is by stretching what the scripture says too far.

God calls John by name to come up. He speaks very plainly that it is only John that is to come up and it was not a future event but a sudden vision taking place then and there. This is not the only time in the Bible that God has given a vision like this to one person who would take the message back to us.

It is true that the events about to be shown to John were for the future though. At least up until chapter 12 where we will see a change. For now though John is seeing the throne room of God and Jesus is getting ready to bring an end to the way things have been.

There are many things here I suggest you study more in detail just to understand better what Heaven is like.

The Book of Revelation Summary: The 5th Chapter – A Time Of Waiting 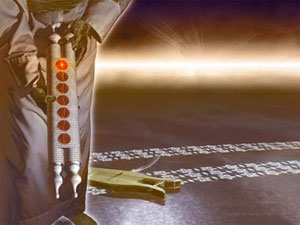 Take special note what is happening in heaven after John is called there. You will notice that they are sad because there is a book sealed up that no one can open. They are searching for someone who can open it. The fact that they are looking and sad shows that Jesus has not yet begun to open the final chapter of the last days. This is another good indication that what happened in the 4th chapter was not the rapture of the church.

But then suddenly Jesus takes the book. This sealed book that no one could look on is about to be opened. God the Father has waited until now without even Jesus being aware of the time of the end that the Father had in His right hand. But now the Father is letting Jesus know. 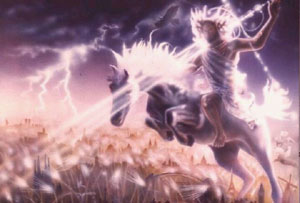 Jesus slowly begins to open the seals one by one. Each time a seal is opened a little bit of the book is uncovered. The process of opening the book is releasing the word of God kept back until now from bringing about the end.

The first seal brings out a conqueror. This conqueror has a white horse which is normally a symbol of victorious royalty such as a king who reigns with absolute power. The rider has a bow as well but it is not said that he has any arrows. He also has a crown that was given to him.

All of these shows who this rider is. He is the antichrist. The first seal to be opened brings him onto the world stage. There is another study here on this man of sin and how he relates to end time prophecy in more detail. 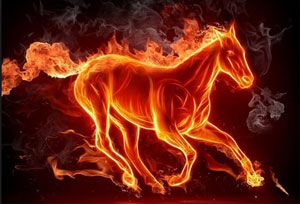 After the first seal brings the rise of the antichrist there is another seal that is opened. This one brings another horse…but the rider is not as important since no details are given about who he is. It is the horse that is important here.

The color red means many things. Most of them are not good. One good example is anger. This is a horse that is all about anger, hatred, and the desire for blood and murder. There will be violence like it was before the flood. Every thought of men will be violent.

How can this happen? With all the power of Satan being set free through his man of sin there is no wonder things are going to get bad. But something major is going to set the world in a downward spiral. A sword is given to the rider that he uses to take peace from the world. This sword can be many things. I personally look at the sword as someones words. 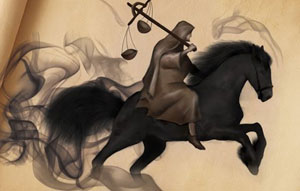 The third seal brings a black horse with a rider who carries a balance (scale). He is told what price to set the food at and not to touch the oil or wine.

Normally black indicates shadows and secrets. It is not hard to know then that the secret of the rider who holds the scales is that his his balance is not even. Food is often something that is used to feed the hungry and poor. But oil and wine are for the rich. Famine will take hold because of the oppression of the rich. 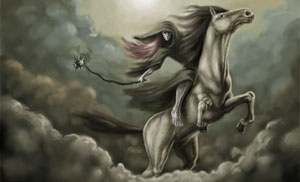 The pale horse is also seen as being ash grey. This is a horse of morning and sadness. Death will be so common and felt so often that the whole world will morn. Most families are made of 4 people on average. The father, mother, and normally two children on average. Out of those four people in every family one will die. This will be a time of great sadness.

The Book of Revelation Summary: The 6th Chapter – The Great Tribulation

The time of great tribulation has come. This seal shows that Christians are going to be killed with great vengeance. Satan is going to make war with the saints. This is an event that takes place in the middle of the 7 years of tribulation and continues to the end of it.

During this time the dead in Christ are given white robes and are with Jesus. Their brothers on earth are joining them daily.

The Book of Revelation Summary: The 6th-7th Chapter – The Hour Of Temptation 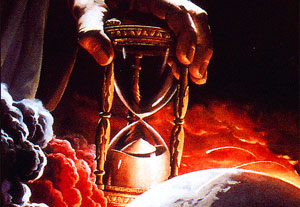 The last day of the tribulation period has come. Satan has poured out his wrath and the full measure of how sinful man can be has been met. God is ready to stop the madness. As Jesus opens the 6th seal we see what He spoke of in Matthew chapter 24. The sun goes black, the moon becomes red, and the stars fall from heaven as a great earthquake also shakes the earth.

The wrath of God is ready to be poured out. But first God makes sure that those who are not appointed to His wrath are protected and kept from the hour of temptation. That is right…the hour of temptation spoken of in the 4th chapter is not a time of wrath during the tribulation. It is a time that God will put men on trial.

As you read further to see the wrath of God poured out you will notice that men would not repent. This hour of temptation is about God giving men their last chance.

But those who are in Christ and still alive are sealed. The angels about to pour out Gods wrath are told not to harm them. Thus they are kept from that hour of temptation.

The Book of Revelation Summary: The 8th Chapter – The Return Of Our King 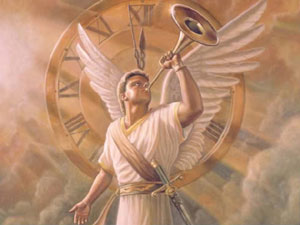 The seventh seal is opened and something happens that is very revealing about what the book shows. The final seal unleashes the wrath of God. It is so heavy and awesome than no one in heaven speaks and not a sound is made. The eerie silence speaks volumes of the anticipation of what is to come. It is as though the whole realm of heaven is breathless at the knowledge of what God is going to do.

It is after this seal that the 7 trumpets sound and the glorious return of the King of kings happens. But there are still some things that take place as well in Bible prophecy. The bowls of wrath are still yet to be poured out.

This is the final seal that held back the end…it is no longer holding it back. Now Christ will gather His church to Himself and we will be with Him forever.

There are many things that happen once this seal it opened. Please continue to the next page about these end time prophecy to learn more.