Can You Lose Salvation

Being a Christian is not something that happens one day and then you carry on with your life. Being a Christian means you are now a follower of Jesus. Your life has not just changed. You have an entirely new one!

You want to walk the way God wants you to and you no longer want to fall into sin. In fact you hate the very thought of sin because what is in you now is holy. Suddenly it happens, your first temptation that drives you to your knees. What happens next?

Can You Lose Your Salvation

The biggest fear new Christians have most of the time is wondering can a christian lose their salvation. They just met a living God and fell in love. The absolute worst thing for them would be to lose that relationship with God!

That combined with a new sense of just how filthy sin really is can send chills through your soul. What if you sin now that you know the truth? Would God turn His back on you? What if you try over and over to live without sin and still fail? Does it mean you are not a Christian? 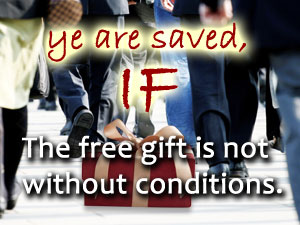 These verses show us that if we keep in memory what we believe then we are saved. But it also says that if we do not continue in what we have believed then we believed in vain. The Bible says in many scriptures that those who are saved are the ones who continue to the end with God. It also gives examples of those who will start to walk with Jesus and then turn their back on Him.

So it seems to be clear that our salvation is dependent on us continuing in the faith or not. We can not and should not believe that we will be granted pardon for our sins if we turn our backs on Jesus! The requirements of salvation is that we believe and follow Him.

What Does It Mean To Fall From Grace

18Now where remission of these is, there is no more offering for sin. 23Let us hold fast the profession of our faith without wavering; (for he is faithful that promised;) 26For if we sin wilfully after that we have received the knowledge of the truth, there remaineth no more sacrifice for sins, 27But a certain fearful looking for of judgment and fiery indignation, which shall devour the adversaries. 28He that despised Moses’ law died without mercy under two or three witnesses: 29Of how much sorer punishment, suppose ye, shall he be thought worthy, who hath trodden under foot the Son of God, and hath counted the blood of the covenant, wherewith he was sanctified, an unholy thing, and hath done despite unto the Spirit of grace?

These verses strike fear into the hearts of many. It is indeed a somber warning. But many people don’t seem to understand it. For some these verses mean that if you fall into sin after you come to Christ then you will lose salvation and never be able to find your way home.

For others these verses are a hypothetical statement. The thought that a Christian could ever turn their back on God is glanced over by saying this is not possible and only a hypothetical point being made.

Often times when we see two extream views the truth is in the middle. This is no doubt the case here. First lets look at the thought that this is not a possible situation.

God has never changed His ways. The Bible makes that clear in Malachi 3:6. Since He has never changed then this passage of scripture still applies to us today. If we turn from our sins and turn to Jesus then we shall live. We will not even have God mention our sins to us. 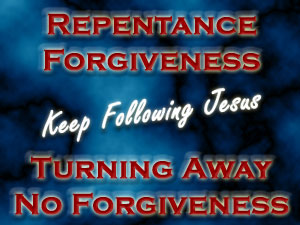 But if we turn our back on Jesus, especially after we have become a Christian, then we will die in our sins because we did not continue with Him. That is what the scriptures teach. It is possible for someone to turn their back on God.

1 Now the Spirit speaketh expressly, that in the latter times some shall depart from the faith, giving heed to seducing spirits, and doctrines of devils; 2 Speaking lies in hypocrisy; having their conscience seared with a hot iron;

These are some more of the scriptures that support this:

12 Take heed, brethren, lest there be in any of you an evil heart of unbelief, in departing from the living God.13 But exhort one another daily, while it is called To day; lest any of you be hardened through the deceitfulness of sin.

4 Nevertheless I have somewhat against thee, because thou hast left thy first love.5 Remember therefore from whence thou art fallen, and repent, and do the first works; or else I will come unto thee quickly, and will remove thy candlestick out of his place, except thou repent.

4 Christ is become of no effect unto you, whosoever of you are justified by the law; ye are fallen from grace.5 For we through the Spirit wait for the hope of righteousness by faith.6 For in Jesus Christ neither circumcision availeth any thing, nor uncircumcision; but faith which worketh by love.7 Ye did run well; who did hinder you that ye should not obey the truth?

So all thoughts of this being impossible for a Christian must be brought into captivity to the truth found in scripture. It is indeed possible for this to happen. But if this brings fear to you then you are in good company.

21 And as they did eat, he said, Verily I say unto you, that one of you shall betray me.22 And they were exceeding sorrowful, and began every one of them to say unto him, Lord, is it I?

Even the twelve closest to Jesus knew in themselves that it was possible for this to happen to them. It brought them great sorrow and they asked “Lord, is it I?”

Is There A Point Where God Will No Longer Grant Forgiveness 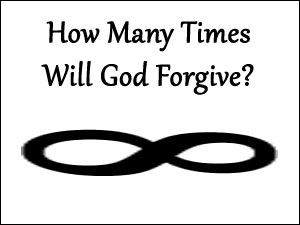 With it now said that a person can fall from grace and turn their back on God another question must be answered. How many times will God forgive?

The reason many do not want to believe the idea that salvation can be lost may be because they fear reaching the limit with God. The verse already mentioned above says something that makes that fear even stronger.

26For if we sin wilfully after that we have received the knowledge of the truth, there remaineth no more sacrifice for sins, 27But a certain fearful looking for of judgment and fiery indignation, which shall devour the adversaries.

What sin is not willfully? If we know the law and we still sin then does this mean the blood of Jesus is not going to be enough for us anymore? God forbid such a thought!

To say that the Holy blood of Jesus isn’t enough is blasphemy. Look back in Hebrews 10 again. Take note that he says those who were under the law of Moses were worthy of death. That law was about sins needing judgment. But he was only using it to compare with the blood of the new covenant.

As Christians we are no longer under the law of sin and death. We are under the new covenant…one of faith. In the old law the way to be righteous was to not do anything wrong. Under the new law of faith the only way you can break the law is by not having faith anymore.

4 Now to him that worketh is the reward not reckoned of grace, but of debt.5 But to him that worketh not, but believeth on him that justifieth the ungodly, his faith is counted for righteousness.6 Even as David also describeth the blessedness of the man, unto whom God imputeth righteousness without works, 7 Saying, Blessed are they whose iniquities are forgiven, and whose sins are covered.8 Blessed is the man to whom the Lord will not impute sin.

So if we are not under the law (those of us now walking in faith) God will not lay sin to our charge. That means there is nothing you can do in the flesh that can stop the power of the blood! But if you stop having faith…you are fallen from grace.

There are days when we have questions and even doubt. Sometimes we will say we don’t believe and then act like it. But if you truly ever gave up all faith in God then you would never feel drawn to Him. You would never return to Him at all at any point in the future. So if you want to be saved and you are still breathing then you have enough faith still to believe. Because you know He is the only one who can save!

There is so much more to be said on this subject. But I hope you will take away the knowledge that it is possible to turn away from God and even though that may be true there is no amount of anything that would make God turn away from those who seek Him.


13 responses to “Can You Lose Salvation”