You may remember from the last unit that we briefly spoke of Acts 8, but did not explore that subject. I did that because there are a lot of things we must cover to really understand it.

14 Now when the apostles which were at Jerusalem heard that Samaria had received the word of God, they sent unto them Peter and John: 15 Who, when they were come down, prayed for them, that they might receive the Holy Ghost: 16 (For as yet he was fallen upon none of them: only they were baptized in the name of the Lord Jesus.) 17 Then laid they their hands on them, and they received the Holy Ghost. 18 And when Simon saw that through laying on of the apostles’ hands the Holy Ghost was given, he offered them money, 19 Saying, Give me also this power, that on whomsoever I lay hands, he may receive the Holy Ghost.

All through this course, you have heard me say that receiving the Holy Ghost happens at the moment of salvation. Yet this set of verses may seem to contradict that if you donât catch a few of the little details that are there. But, if you do look closely at this passage then you will see that there is no contradiction.

From a quick reading of the passage above, it may seem as though it is telling us that the people of Samaria had heard the gospel, believed it, been water baptized, and become Christians. Yet, we are told that Peter and John had to go to them, pray for them, and lay their hands upon them in order for them to receive the Holy Ghost. 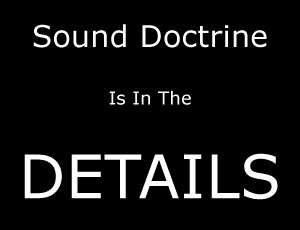 The little detail that we insert into this, and thus cause a contradiction, is the idea that these people were already Christians. They were not, though.

If you remember, there are 5 requirements that the Bible tells us are needed in order to become a Christian. The first requirement is that we believe. Obviously, the Samaritans believed the Gospel. The third is that we must confess. They believed it enough to make an outward confession of their belief through water baptism.

But, what about the second requirement? That requirement was repentance. What we have done with this set of scriptures is made the assumption that this requirement must have already been met. That is why we may believe they were already Christians. But this assumption is unwarranted.

13 Then Simon himself believed also: and when he was baptized, he continued with Philip, and wondered, beholding the miracles and signs which were done.

OK, so here is the situation in which we find ourselves. Simon is an example of what was happening with these people. In verse 13 we read that he also believed and was baptized, just like everyone else. Again, the first and third requirements for salvation had been met. But, we are not told that they, nor he, had repented.

18 And when Simon saw that through laying on of the apostles’ hands the Holy Ghost was given, he offered them money, 19 Saying, Give me also this power, that on whomsoever I lay hands, he may receive the Holy Ghost. 20 But Peter said unto him, Thy money perish with thee, because thou hast thought that the gift of God may be purchased with money. 21 Thou hast neither part nor lot in this matter: for thy heart is not right in the sight of God. 22 Repent therefore of this thy wickedness, and pray God, if perhaps the thought of thine heart may be forgiven thee. 23 For I perceive that thou art in the gall of bitterness, and in the bond of iniquity.

Ah, take a look at the little detail we seem to have missed in verses 21 through 23. Simon, an example of the people of Samaria, had believed and confessed through water baptism. But, we are told that his heart was not right before God since he had not yet repented.

This is why the Holy Ghost had not yet been received by these people until Peter and John showed up.

We find that Peter and John didnât just come to them praying and laying hands on them. No, they also preached the word of the Lord. Philip had already done this, but it was not the complete word of God. They didnât know enough to repent.

This is how it often is in our day. There are many who preach that you must believe, but neglect to teach that you must repent. It doesnât mean they are evil, or wrong. It just means they are lacking in that one area. This is why Peter and John took up the slack.

We read in Acts 8:17-19 that Simon saw the Holy Ghost being given when the apostles laid their hands on the people. But, was his interpretation of what he was seeing correct, or was he also making an assumption?

The verses say that when the apostles laid their hands on the people they would receive the Holy Ghost. But it doesnât directly say that the Holy Ghost was TRANSFERRED in this method. It only tells us that Simon saw it as such.

Consider this: Often, when a person comes to the front of a church and they ask the preacher how to be saved he will place his hand on them and pray with them. It is during this time that they are praying for forgiveness as well as pledging to follow Jesus. In other words, they are repenting.

So while the preacher has his hands on the person they are receiving the Holy Ghost. To an outsider, it may look like it is being given by the preacher. But it is ALWAYS God the Father who gives His Spirit.

Consider this as well: The Holy Ghost is invisible. So how can a person âseeâ someone receive something that is invisible? They can only do so by seeing the way that person is affected. So there were visible reactions that he was watching. Most likely, these people spoke in other languages and may have even prophesied.

What Simon was seeing was not the receiving of the Holy Ghost. It was the power of the Holy Ghost flowing through those who had received Him. This power can âcome and goâ at the will of the Spirit. It is always there, but not always activated. Could you imagine a person who always spoke in tongues? They would not even be able to talk to others about the weather. There are times when it is needed and times when it is not.

14 Neglect not the gift that is in thee, which was given thee by prophecy, with the laying on of the hands of the presbytery.

Here again is another often confused verse. One may assume it is also speaking of the Holy Ghost being given. However, this is not the case. Timothy was being given a prophecy as the presbytery laid their hands on him.

You may remember that faith comes FIRST by hearing and believing the word of God. So Timothy is being given the word of God here, and through that word, he is receiving a gift of faith.

5 When I call to remembrance the unfeigned faith that is in thee, which dwelt first in thy grandmother Lois, and thy mother Eunice; and I am persuaded that in thee also. 6 Wherefore I put thee in remembrance that thou stir up the gift of God, which is in thee by the putting on of my hands.

This is further supported by 2 Timothy here. Paul recounts the FAITH of Timothy. He says that he is persuaded that this gift of faith (faith is one of the gifts given by the Holy Ghost) is in Timothy. So Paul is asking Timothy to stir up THAT GIFT which was given to him by the laying on of Paulâs hands (part of the presbytery) as they gave a prophecy. Which he believed and therefore gained the gift of faith.

What IS transferred, however, is a deep connection between two believers as they agree on something. What often happens during this is an overflow of the power and presence of God. This will often cause a personâs body to become overwhelmed as they stand before God. 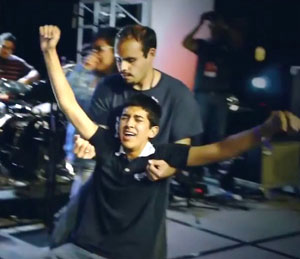 A person may physically no longer be able to stand, but this is different than the trance which is seen in the culture of the church today. In fact, there are a lot of things people claim is the work of the Spirit, but is not. ALWAYS trust the scriptures over a feeling or an experience.

The Connection of Touch

The last thing I want to restate here is that there is power in the touch of the hand. Itâs as if a part of you is connected to the other person in some way. As I said before, you break the touch barrier.

This leads to a deeper and more intimate type of spiritual power. As one person, who is filled with the Holy Spirit, touches another person, then that other person will often feel more than the simple touch. They will often feel the Spirit of God Himself touch them.

The next thing we will talk about is the giving of a blessing. This can be done with or without the laying on of hands. Remember that touch is just for the purpose of having a deeper and more intimate connection with someone.

Continue To Unit 5:3 – Giving a Blessing to Someone OR 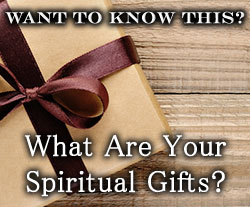