How to Endure until the End

We have covered a lot of ground in this unit on repentance and salvation. We have established that there are five requirements for salvation. They include believe, repent, confess, baptism, and endure unto the end. So far, we have actually gone into detail on four of them.

We have said that in order to repent you must believe. We also said that confession and baptism are simultaneous with repentance. So we could actually roll the 5 requirements into only 2 basic ones. Those are to repent and to endure unto the end.

We have also spoken a little bit about what it means to endure unto the end. We spoke of the difference between the promise and the reality of salvation. In short, we must keep the faith until the day we die.

But there is still one thing I would like to give you information on. Itâs about how to endure until the end. I want you to know how to fight the good fight and keep the faith.

Endure until the End

8 Be sober, be vigilant; because your adversary the devil, as a roaring lion, walketh about, seeking whom he may devour: 9 Whom resist stedfast in the faith, knowing that the same afflictions are accomplished in your brethren that are in the world. 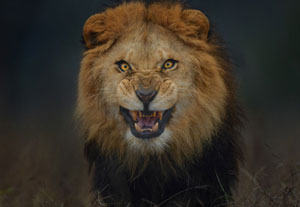 The roar of a lion is meant to strike fear into the heart of his prey. The prey becomes fearful and clumsy. He begins to make errors in judgment. Then the lion jumps on him and sinks his teeth into the prey.

This is why we are told to be both sober and vigilant. We need to know how to walk a straight line. We have to be in control of ourselves, while also being aware of our surroundings.

What does that mean for us spiritually? It means we must not only know the word of God but we must also know why we know what we do. Our belief system is only as strong as the reality of what we believe in. If we believe there is a wall of protection on our left that isnât really there then that is where the lion is going to attack from.

Too many people have walked away from the faith because they believed things that were not true. When those things failed them they began to question God. But, they really should have been questioning why they ever believed those things in the first place and what is the TRUE reality.

5 If any of you lack wisdom, let him ask of God, that giveth to all men liberally, and upbraideth not; and it shall be given him. 6 But let him ask in faith, nothing wavering. For he that wavereth is like a wave of the sea driven with the wind and tossed. 7 For let not that man think that he shall receive any thing of the Lord. 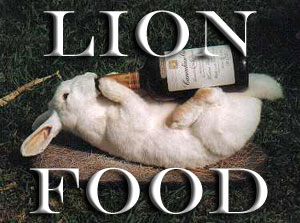 Being sober means we are not dizzy and stumbling around. We are not a ship tossed to and fro with every wind and wave of doctrine. We know what we believe, and we know why we believe it. Our belief isnât false and we can stand on it as a sure foundation that will not be moved.

But if we believe things simply because it is what we were told and we donât really understand it then our foundation is weak. We are not sober. Our judgment can be compromised and we can become fearful that we have believed a lie. Itâs then that Satan will attack and cause you to renounce the faith.

Being vigilant also has meaning for us. It means we are to keep our eyes and ears open. If we do happen to be standing on something less than secure we can see it and listen to God as He calls us to the truth, the rock.

This is why shutting our ears to a message because it doesnât line up with our current belief can be dangerous. That message may be false, … but if it is then you should be able to listen to it and still stand firm. Because it is weaker than your foundation. But if the message is true then you will see your foundation begin to crumble, and you will know that you need something stronger. 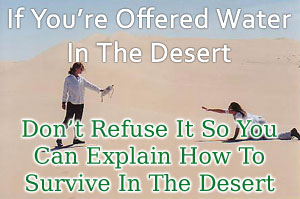 One of the reasons many are weak in the faith isnât because they donât read the Bible. Itâs because they donât shut their mouths and listen. They speak what they âknow the Bible saysâ and attempt to teach others. But when someone with a greater understanding comes along they try to teach them as well.

So they hear just enough to reply and attempt to teach the teacher. Thus, the Bible has said they hear but do not understand. They have been âmade fatâ with the things they âknow.â They can accept no more, seeing as they must first be purged of their own false beliefs.

If you can not shut your mouth and listen as someone tries to explain something to you then even if they are wrong you have still proven yourself to be unwise. Because you are not able to test them to see if they are correct, or if they need correction.

So my advice to you, that will help you to endure unto the end, is to know the Bible for yourself. Know what you believe and why you believe it. Also, donât be afraid of hearing something that may be false. Because if your foundation is firm you will be able to know the difference anyway. Test every doctrine, including your own.

This will make you strong in the word of God. It will equip you to fight your enemy and to stand your ground. You will be able to endure unto the end because the word of God will never fail.

12 Beloved, think it not strange concerning the fiery trial which is to try you, as though some strange thing happened unto you: 13 But rejoice, inasmuch as ye are partakers of Christ’s sufferings; that, when his glory shall be revealed, ye may be glad also with exceeding joy.

Peter, James, John, Paul, and every other Christian in history has gone through trials. Some were in prison, some murdered, some sick and near death. The Bible goes so far as to say that they hated even their own lives.

How many people can say that they have also experienced these things? All of us have faced, and will face, trials in our lives. Some say that God will not put more on you than you can handle. But that is actually not what the Bible says.

It says He will not allow you to be TEMPTED above what you are able to handle. But make no mistake, life will hand you more than you can handle. Even Paul said so.

Why? Why does God allow His people to suffer even as they cry out to Him? Well, consider Jesus.

7 Who in the days of his flesh, when he had offered up prayers and supplications with strong crying and tears unto him that was able to save him from death, and was heard in that he feared; 8 Though he were a Son, yet learned he obedience by the things which he suffered;

So when you are suffering do not lose the faith. Even if God never removes the suffering in this life, it still has a purpose for good.

And so we will end this unit with one final word of advice. Endure unto the end and you will receive that which you hope for, salvation and eternal life in the comfort and glory of God.

Unit 3 Complete. Return To Course Home To Begin Unit 4 – The Baptism of the Holy Spirit OR


One response to “How to Endure until the End” 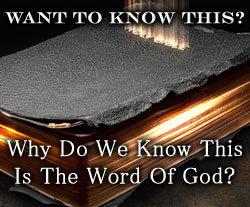 I was raised as a catholic. In 2017 I fell into a deep addiction & found myself accepting Jesus Christ as my Lord and savior. I never felt the love that I felt for anyone towards Jesus Christ, what he suffered for me, for all of us. I love him so much. I understand the END_OF_DOCUMENT_TOKEN_TO_BE_REPLACED