Normally, after a skeptic has lost all hope of defending their belief that the Bible contains errors they resort to moral arguments against God. They go from âThere is no Godâ to âIs God evil then?â

But, what do they base these claims on? They base them on a sense of morality that God gave them in the first place. Yes, there MUST be a God for morality to make sense. Even if you say that morality comes from empathy you have to ask why you have empathy. If you can keep yourself from going in circles then you eventually arrive at the only answer possible. It comes from God.

Nevertheless, people attempt to judge the judge by His own standards. The problem is that people condemn the innocent far too often. So, this is why we are going to answer some of the common moral arguments against God.

First, we tackle the issue of âThe Problem of Evil.â Then we will tackle some of the general issues that are often brought up. These issues normally revolve around what the Bible says about sex, women, slavery, and so on. Then, finally, we will go into detail to examine specific events and scriptures in the Bible that may seem immoral to some people.

If God is good then why is there suffering? Find Out NOW>>>

The belief that an omnibenevolent God would not allow suffering is flawed. There is actually a benevolent reason that God allows evil to exist. And yes, God created the concept of evil. No, God did not force anyone to be evil.

Can guilt and righteousness be exchanged? Find Out NOW>>>

Vicarious redemption is said to be immoral because the guilty should have to pay for their own crimes. Would it be justice if the innocent took their place? When you understand that ALL are guilty then things become a lot more clear.

Is it really wrong for God to kill? Find Out NOW>>>

God flooded the entire planet, killing men, women, and children. He ordered Israel to slaughter entire nations. If it were anyone but God then this would be wrong. But, it’s not. Find out why even genocide isn’t evil if God does it.

Is an eternal Hell really a fair punishment? Find Out NOW>>>

The thought of a loving God sending someone to an eternal Hell just for something as “simple” as a white lie may not seem fair. But the truth is much deeper than most people are willing to look. Yes, the punishment does fit the crime. 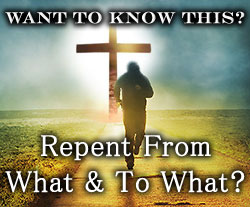