Is the Bible the Word of God

It begins with the words âIn the beginning God,â in the book of Genesis, and ends with the word âAmenâ in Revelation. And, between the first and last words we read about creation, the history of mankind, Israel, and the future.

If this were an ordinary book such as “War and Peace” or “The Cat in the Hat” it wouldnât be so controversial. But this book is not like any other book. Because this book claims to be the word of God.

Is the Bible the word of God? Can we trust it? And, can it prove that the God it speaks of is the one true God?

The first claim we are going to look into is the one that makes the Bible so different than other books.

Does the Bible Even Claim to Be the Word of God

This scripture in itself is enough to say that the Bible makes the claim that it is the word of God. But, if there is any question about what word it is speaking about we can go to another set of scriptures.

16 All scripture is given by inspiration of God, and is profitable for doctrine, for reproof, for correction, for instruction in righteousness:

According to these verses in the Bible, we can see that the Bible itself does make the claim that it is the word of God. 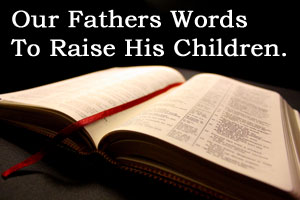 It also makes the claim that everything written in the scriptures can and should be used for doctrine (teaching), reproof (harsh discipline like spanking a child for doing wrong), correction (different from reproof in that this is more of learning something new, where reproof is being reminded of what you already know), and instruction in righteousness.

In other words, the Bible is like the words of a Father raising His child.

So it is clear that the Bible claims to be the word of God.

The Bible claims that it is not the word of men, nor is it something that man even wanted. Yet, men wrote it. The Bible doesn’t deny that. But, the Bible does tell us that these men only put the pen to paper as God told them what to write.

So we need to test this claim. Did men want to write the things in the Bible? Did they want it to be seen as the word of God? Did men even have the ability to write it?

32 And what shall I more say? for the time would fail me to tell of Gedeon, and of Barak, and of Samson, and of Jephthae; of David also, and Samuel, and of the prophets: 33 Who through faith subdued kingdoms, wrought righteousness, obtained promises, stopped the mouths of lions. 34 Quenched the violence of fire, escaped the edge of the sword, out of weakness were made strong, waxed valiant in fight, turned to flight the armies of the aliens. 35 Women received their dead raised to life again: and others were tortured, not accepting deliverance; that they might obtain a better resurrection: 36 And others had trial of cruel mockings and scourgings, yea, moreover of bonds and imprisonment: 37 They were stoned, they were sawn asunder, were tempted, were slain with the sword: they wandered about in sheepskins and goatskins; being destitute, afflicted, tormented; 38 (Of whom the world was not worthy:) they wandered in deserts, and in mountains, and in dens and caves of the earth.

It doesnât sound like the message contained in the Bible makes for an easy life lived with others. In fact, it sounds like the people who believed the things in the Bible had a hard time because of it.

What man wants to burn in a fire, be cast to the lions, tortured, and made outcasts of society? This is what the scriptures can bring with them. There is no reason to believe men would want to write the things in the Bible. Because the Bible would bring this kind of suffering on them.

If the Bible was actually written by men to control people you would have to ask a very important question. Who gets to control them? The Bible was written throughout the history of many kingdoms. Many were prophesied to fall. So what kingdom would want to control its people by telling them their kingdom would fall?

No, government control would not even be a reason for men to write such a book. And, if it were simply for morals then why would they be willing to die for the things written when they could just make a law? Again, there was no reason for a man to want to write the Bible.

Could Man Make the Bible If He Wanted

9 Remember the former things of old: for I am God, and there is none else; I am God, and there is none like me, 10 Declaring the end from the beginning, and from ancient times the things that are not yet done, saying, My counsel shall stand, and I will do all my pleasure: 11 Calling a ravenous bird from the east, the man that executeth my counsel from a far country: yea, I have spoken it, I will also bring it to pass; I have purposed it, I will also do it.

The Bible is a collection of 66 books written over centuries of time, by the lowest of the low, to the greatest of the kings of the earth. And yet, they all agree and they all have one thing in common. They are all 100% accurate. And they all tell the story of the end from the beginning.

Iâm not just talking about things that men can control either. Prophecies about Jesus alone are breathtaking. There were prophecies hundreds of years before Him that tell the exact time of His birth, the method of His conception, His life, death, and resurrection.

Could men have known what empires would rise and fall centuries before they did? Parts of the Bible were written before some of those nations even existed. It could not be written by the knowledge of men.

There is no way that men, hundreds and even thousands of years before the events that they foretold, could have done so with 100% accuracy. And with the only, about, 500 prophecies left not fulfilled, I see no reason to doubt that they will come to pass as well.

I canât imagine things that are not currently possible happening. I am sure the prophets who wrote these prophecies down couldnât imagine it either, and yet they happened.

So no, the men who wrote the Bible did not do so of their own will or by their own knowledge.

But Can We Trust It

Thus far I have said that the Bible can be tested based on its ability to tell the end from the beginning. But I have only mentioned a few of those things. I have spoken in general like this because of the vast amount of information.

I will be going into great detail as we get into unit 6. But for now, we have given you some things to think about. The Bible does make the claim that it is the word of God. It was not written by the will or understanding of men. But, can we trust it?

We will be talking about the reasons for trusting the Bible while also being aware of the lies which surround it in the next few units.