Can the Bible Be Trusted

But, can the Bible be trusted? And, even if it can, how can we trust those who have copied and translated the scriptures that God first gave to men? Can we know if the Bible was changed in any way? Why should we believe the Bible?

As for if God Himself can be trusted, let me ask you, … how do you know you can trust someone?

1.) They have been proven to be trustworthy in the past.

2.) They have a good reputation from others as being trustworthy.

3.) They have the ability to keep your trust. (you see that they can do something, so you trust them to do it).

We already talked about some of the prophecies already fulfilled in our last unit. So we can see that God could be trusted in the past.

There are many witnesses who claim God that God is trustworthy. Some of them even testifying of that fact at the cost of their lives. As we also have said in the last unit.

And, as for the ability of God, … well, the power of God and His ability should be clear:

20 For the invisible things of him from the creation of the world are clearly seen, being understood by the things that are made, even his eternal power and Godhead; so that they are without excuse:

Was the Bible Changed 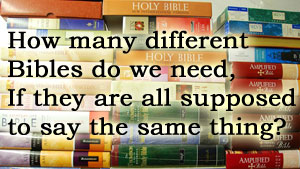 This means the messenger has a great deal of power to deceive those he gives the message to. Since God uses men to bring His message to others (such as through the Bible) we must be sure that the messenger is worthy of trust.

Now again, how do you know you can trust someone?

1.) They have been proven to be trustworthy in the past. (Obviously man has not always passed this test)

2.) They have a good reputation from others as being trustworthy. (Obviously man has not always passed this test)

3.) They have the ability to keep your trust. (you see that they can do something, so you trust them to do it). (Obviously man has not always passed this test)

So we have a problem. Getting the correct message from the messenger is a 50/50 chance.

There are many liars in this world. But there are also people who tell the truth. With all the lies being sown by the enemy, â¦there is still the thread of truth that runs, without fail, through time. Though, it may be harder to find with the clutter of lies that try to surround it.

What does the Bible say to prove itself in these cases?

The Bible says that we can know if the messenger is telling the truth IF the message is proven to be true. Now, this may sound like a paradox but it really isnât. Try to remember that it is trust that the messenger is building. So if the small things he tells you come to pass then you can trust the big things will as well.

So, if your translation of the Bible says something that isnât true, â¦ the messenger has either added to it or taken away from it. 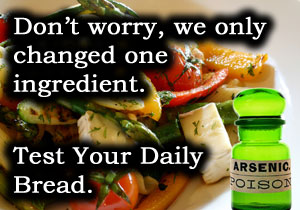 We now see that the Bible should be tested based on its accuracy. But for some reason, many people choose to test it by age instead. So let’s play a fun little game to explore why this is a horrible way to test the Bible.

But, then in 1220, another copy of the book is written, â¦ but this time it changed the words to, âThe farmer had a yellow dog.â And again, in 1230 yet another copy is written from the 1200 original.

So now we have a book that was written in 1220 which changed the message of the book. But we also have a book from 1230 which remains faithful to the original.

Fast forward to the current year. We have had thousands of copies of that book spread throughout the entire world. Apparently, everyone wants to know about this farmer and his dog!

But, the problem is that some books say the dog was brown and others say it was yellow. The world (for some strange reason) now stands in peril if we can not figure out what the true color of the dog was!

The originals and first copies of the book written in 1200 and 1210 were all lost to time. But copies of those originals made in 1230, that have NOT changed, still exist.

But, they are not as old as the one which changed the color which was written in 1220.

Since the oldest copy we have was written in 1220, does that mean that this copy is the most accurate? Obviously not. Age doesnât provide a true test of accuracy. What if that old copy, which has been changed, said that the farmer never even had a dog?

It would be a lie. Sure, most of the book may say much the same things, â¦ but it is still not the same book. This one key thing changes EVERYTHING!

OK, now that was obviously just a funny story with a moral to it. The world isnât really going to end because we donât know the color of a fictional farmerâs dog.

But, apply that test to the translations and versions of the Bible you use. Are they accurate? Or are there problems? Most people donât know this, but not all Bibles are translated from the same original texts.

In fact, many are translated from texts that are considered closest to the original based only on their age. As you can see from the farmer’s dog, that is not the best way to choose what copy to translate from.

But, what do these scholars base this on? It is based on AGE! Do you see the circle here? People say that these texts are more accurate than others based on the majority opinion of scholars, who base their opinion on age, which we have already shown is a horrible way to test how authentic a text is!

I have had many conversations with people who have very twisted views on doctrines in the Bible. Many times it is because of the version they use. A little leaven will leaven the whole lump. In Unit 1:4a we will examine this in more detail.

Unit 1:4a – What Bible Translation Is Best OR

I met my husband on a phone site July 3 2014. 3 months after we met we got married. He was in work release and had a few months till he got out. When he got out we lived with a lady that had bone cancer and we moved in to help her out. Well, END_OF_DOCUMENT_TOKEN_TO_BE_REPLACED