What Bible Translation Is Best

We know from the last study that the best test for the Bible is how accurate it is. We also spoke very shortly on how not all Bibles are translated from the same texts. So in this lesson, we will dig a little deeper into the issue.

First of all, it is obvious that we do not have the original handwritten scripts that were penned by Moses, Paul, or anyone else for that matter. What we do have are copies. Because of that, we need to talk very briefly about if it is even possible to have copies that hold true to the original.

I am sure you have heard of the game telephone. You whisper a secret to someone and tell them to pass it down. By the time 10 people have heard the secret it has changed a little in most cases. This is something people like to bring up when they dispute the accuracy of the Bible.

They also like to bring up the thought that before Moses put the first books into writing the stories were passed down orally. Which again is a reason (they believe) to doubt the accuracy of any copy. But when you consider that it was God who spoke to Moses, telling him what to write, those oral traditions mean nothing. God is the author of the book and He was the one who began it all. No matter what anyone else may have changed, God spoke truth. So it doesnât matter what happened before the words were put into print.

As for the game telephone, … instead of speaking the secret, write it down. Now have the next person write a copy. Go down the line like this. It will remain the same. If not, you can at the very least go back to each person and see where it was changed. Then you can just pick up from there again and carry on.

So even if someone wanted to change it, they may be able to make their own, … but they could not change it. Especially a religious text such as the Bible that people hold to be so valuable. The Bible has been tested through time. Today we still have copies that can be trusted. We also have false copies that would seek to twist the truth.

What Bible Should I Use

There are a lot of different versions of the Bible. But, they did not all come from the same place. As we said before, the age of a document does not determine its reliability. Only its accuracy does. And, please note that when I speak of accuracy I am speaking of the accuracy of the message and not the accuracy of the copy. One copy may have a different spelling but still have the same message and so it is accurate.

Since language is about the MEANING of words rather than the spelling or grammar, the concept of an accurate translation has to be based on the meaning of the words. The message itself is what must stay intact. 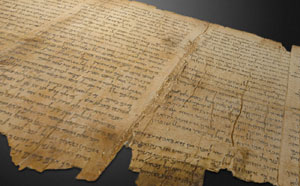 Since we are speaking English, we are only going to deal with the English Bibles. Now there are a lot of them. For the most part, many of them are translated from the LXX for the Old Testament. The LXX is also supposed to be a Greek translation of the original Hebrew.

A quote taken from Wiki has this to say, âModern translations mainly use Eclectic editions that conform more often to the Alexandrian text-type.â So we see that it all begins with the Old Testament. The documents used to translate the New Testament were chosen based on what would best conform to the Old Testament LXX.

In comparison, the KJV was translated from the Textus Receptus for the New Testament and the Masoretic Text for the Old Testament. Which makes it a different book from the others. By the way, the Masoretic Text (used for the Old Testament) is what Jesus would have read from. It was used during that time, despite the common belief that it was the LXX (which we will address in the next study).

Sadly, even the NKJV (though it does hold to most of the same original copies of the MT) does not hold true to using these documents alone. So today we really only have one Bible (the KJV) which uses the Textus Receptus and the Masoretic Text. Others include bits and pieces from the LXX and other documents that are like the LXX.

So now we have a background to understand that not every bible is actually THE Bible. We will explain this over the next few lessons. But first, let me be sure to point out that though many Bibles may differ on some things they all seem to at least have a majority of similar themes. The issue, however, is that a little difference here will change something somewhere else too.

What Bible Is the Most Accurate

Once again, I want to let you know that the test in finding the word of God and turning away from the fake is accuracy. Beware! Even the Devil is transformed into an angel of light! Just because a bible says much of the same things doesnât mean it isnât a fake. Jesus said a little leaven (like yeast added to bread) will leaven the whole lump.

Wait, … donât ALL Bibles have errors and contradictions in them anyway? No, not at all. In fact, the KJV has been around since the 1600âs and has been under attack ever since. It has been tested and retested. Today you can find websites that list 1,001 errors and contradictions in the Bible. But most of them point to other bibles than the KJV. And those that do point to the KJV are easily refuted if you actually study.

The KJV has never failed upon close study. Yet others have (as we will show in a future lesson). Oddly, however, the KJV is the one that gets most of the abuse. In fact, some who use other translations will even attack the KJV. Of course, that is a two-way street, though.

Anyway, this page is not a study to tell you what is and is not an error. This page is only a primer to lay the foundation for our next few studies. I just wanted you to know that when 2 translations disagree, you can bet that at least one of them is a fake.

Why Is It Important to Know Where Our Bible Came From

This is a very sensitive subject for many Christians because of the importance of the Bible to our lives. We use it as a guide to growing closer to our God, to test our doctrines, and more.

15 And that from a child thou hast known the holy scriptures, which are able to make thee wise unto salvation through faith which is in Christ Jesus. 16 All scripture is given by inspiration of God, and is profitable for doctrine, for reproof, for correction, for instruction in righteousness: 17 That the man of God may be perfect, thoroughly furnished unto all good works.

With so much value placed on the scriptures, there is no doubt that when you touch the Bible you touch the heart of Christians everywhere. But what if there is something wrong with the heart? Sometimes we have to perform surgery. It hurts, but it is vital to our lives.

What happens if the set of scriptures that Christians look to for all of this is found to be faulty? What if the very Bible that we use to test our doctrine, and examine our faith is in error?

3 If the foundations be destroyed, what can the righteous do?

Without the foundation of scriptures, we are helpless. This is why the subject is such a hot button issue.

But this is also why we must examine our Bible very closely. If it is vital to us then we should know where it came from and how solid it is. That is why the next few lessons may be a bit long and it may be hard to take inâ¦but knowing these next few subjects are vital.

I promise you that this information is of very real importance for Christians to not only read, but know so that they can be sure that the witness they have in the Bible is true. Which is one of the reasons Luke tells us He wrote his part of the Gospels.

And before we move on, I also must stress that just because one version of the Bible may contain something that would disqualify it there is no reason to believe ALL of it is a lie. As the saying goes, âDonât throw the baby out with the bathwater!â So yes, even some good can come from a false witness if they speak at least a small amount of truth.

So let’s test our Bible. The next few lessons will help us to do that.

Unit 1:4b – Why Was the Bible Written OR


2 responses to “What Bible Translation Is Best”